The newly-expanded Inspire Poetry Festival taking place in key Nottinghamshire libraries this summer is proud to announce a quartet of impressive poetry names:

Nottingham-born Henry Normal makes a welcome return to the county – and to poetry – with a gig in Worksop Library on 11 July. Better known for his work as co-writer and producer of numerous TV and film hits including The Royle Family, The Mrs Merton Show, and Oscar-nominated Philomena, Henry – described by The Scotsman as ‘The Alan Bennet of poetry’, has just published his first poetry collection for twenty years.

Poet of the moment Hollie McNish will join us for two performances – at West Bridgford Library on 12 July and Worksop Library on 13 July. Hollie’s most recent book, Nobody Told Me, was recently awarded the Ted Hughes prize and her next, Plum, is out soon. Hollie’s straight-talking, poignant take on motherhood has won her a massive online following and Benjamin Zephaniah has said ‘I can’t take my ears off her’.

The brilliant Scottish poet, novelist and playwright Jackie Kay appears at Southwell Library on 14 July. Her first collection, The Adoption Papers, won the Forward Prize, a Saltire prize and a Scottish Arts Council Prize. Fiere, her latest collection, was shortlisted for the Costa award. She was awarded an MBE in 2006 and was named Scots Makar - the National Poet for Scotland – in March 2016.

Liverpool-born Paul Farley will appear at Southwell Library on 15 July. He has written four poetry collections including The Ice Age which won the Whitbread Poetry Prize. A frequent broadcaster, he presents BBC Radio 4’s poetry programme The Echo Chamber  and is Professor of Poetry at Lancaster University. Mark Haddon says that Paul Farley writes ‘…lines that will stick with you for a really, really long time.’

Inspire who deliver culture, learning and libraries on behalf of Nottinghamshire County Council secured public funding by the National Lottery through Arts Council England to expand the original Southwell Poetry Festival to three further libraries across county. The Inspire poetry festival is open and friendly, and ideal for anyone who is not sure about enjoying poetry and are wanting to give it a try!

Inspire’s Chief Executive Officer Peter Gaw said: “We’re delighted to be able to build on the success of Southwell Library Poetry Festival and take it to more of our library venues, thanks to funding through Arts Council England.

Audiences will have the chance to enjoy some fantastic poetry events, live at a library, including appearances from acclaimed poets, workshops, children’s events and more.

We are passionate about bringing inspiring arts and cultural events to our libraries, and the newly expanded poetry festival is a great example.”

Tickets are now on sale for the above acts: www.inspireculture.org.uk/poetry-festival

Inspire will announce the full Poetry Festival programme (including further readings, workshops and events for children, taking place in Southwell, Mansfield Central, West Bridgford and Worksop Libraries) in May 2017. 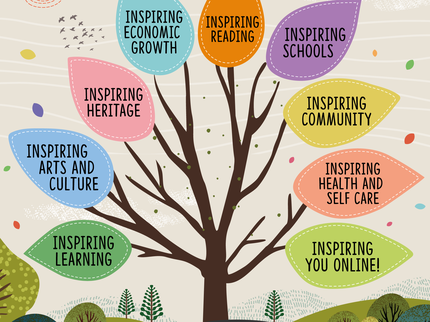